I never knew author, screenwriter, director Nora Ephron, but she was everything I wished I could be when I grew up: funny, sharp, smart, fashionable, definitive but not high-maintenance (there’s a difference). Known best for her films “When Harry Met Sally”, “You’ve Got Mail”, “Julie & Julia” and “Heartburn”, she knew the art of storytelling, how to write the wittiest of prose, had a true passion for food, and loved people. She seemed so cool and confident, yet warm and welcoming at the same time.

Nora passed away this past June. So when I visited New York City recently, I wanted to somehow pay tribute to her. Since her love of food was well documented, I went to a few places that reminded me of either her or her stories. And no, I didn’t make a trip to Katz’s Deli (http://katzsdelicatessen.com), which was famously featured in my favorite film, “When Harry Met Sally”. Nora surely wouldn’t want me to be that predictable.

In reference to Minetta Tavern, Nora once said to New York Times journalist, Frank Bruni, “You ordered the steak, right?…Excellent! Now we can talk about the potatoes.”

If you’ve ever read her novel “Heartburn”, you’ll know her affinity for the spud, claiming that it’s the perfect comfort food for wallowing your sorrows in.

The potato sides have been known to upstage the beef dishes at this famous New York institution. This wasn’t lost on Ms. Ephron. She’s raved about the New York Strip Steak, but I’m almost sure she’s expressed her love for their famous Potatoes Anna at one point. One bite of those delicate, buttery potatoes, baked until golden brown on top and perfectly crisp, and I was blown away. It’s like having a potato casserole with crisp potato chips on top. She was totally right. They’re not to be missed. 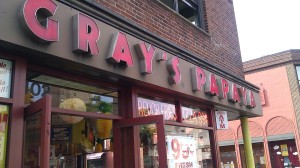 Nora once said in an interview with Charlie Rose that she would want her last meal to be a hotdog from Nate ‘n Al’s in Beverly Hills with a little Gulden’s mustard: nothing fancy. And though I’m not in Beverly Hills, we can certain give Gray’s, arguably New York’s most famous hotdog, a shot. Plus, the Upper West Side location I visited was the one supposedly featured in her film, “You’ve Got Mail”.

I ordered my dogs with nothing fancy: just the house mustard (which tastes like a good Dijon). It didn’t need anything else since the dog itself was the star, here. Though the bun tasted suspiciously like one you’d find at the supermarket, the link had great flavor. The casing, indeed, had that perfect snap that’s been much hyped. But it was the charred flavor that stood out and made it taste like no other hotdog I’d ever had before, and that’s a good thing. Though the “Recession Special” of two hotdogs and a drink for $5 is a great deal, they were smaller than I’d expected. 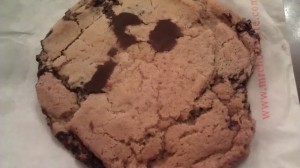 “I look out the window and I see the lights and the skyline and the people on the street rushing around looking for action, love, and the world’s greatest chocolate chip cookie, and my heart does a little dance.” – Excerpt from the novel Heartburn by Nora Ephron

Everyone will have an opinion about where you can find the best chocolate chip cookie, but I figured I couldn’t go wrong with what many consider the “expert” on chocolate, Jacques Torres. This celebrity chef’s chocolate chip cookie is world-renowned, and for good reason. It’s a huge disk of a cookie that’s bigger than an infant’s head. The chips are flat and wide and somehow melt so perfectly into the dough while baking, that they create ribbons of chocolate inside the cookie, distributing that rich chocolate flavor in every bite. The chocolate itself had a lot of depth with hints of vanilla and cherry, with a great balance of bitter and sweet. The cookie dough itself was no slouch with the rich taste of butter and vanilla coming through, as well. Nora would surely have approved.

“When you are actually going to have your last meal, you’ll either be too sick to have it or you aren’t gonna know it’s your last meal and you could squander it on something like a tuna melt and that would be ironic. So it’s important … I feel it’s important to have that last meal today, tomorrow, soon.” – Nora Ephron

So though I never knew you Nora, and have no way of knowing for sure if this list would’ve met your approval, I’d like to think that the mere search for some of the best eats in the city you loved so much would’ve made you smile. It certainly did me.