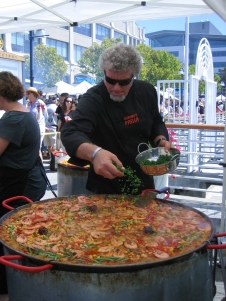 The Bay Area’s first Eat Real Festival happened this past weekend in Oakland’s Jack London Square. An estimated 30,000 foodies from all over the Bay Area came to enjoy live music, support local farmers and food purveyors, and sample food from over 50 different street food vendors. I couldn’t wait!

Jen and I arrived at around 10:30 am, which was about 30 minutes before showtime, so we could avoid what would be the inevitable long lines later in the day. We came on the last day of the event to avoid the heat from the past two days and avoid the mistakes of others who had ventured there before us. It was nice being there that early. The area had a distinct energy but it was quiet with just the right trickle of people milling about. Vendors were smiling, friendly, and getting their food and selling areas ready for the day’s crowds.

Although there were some other vendors I didn’t get to try, simply because there just isn’t that much room in this tummy, I did try the following vendors: 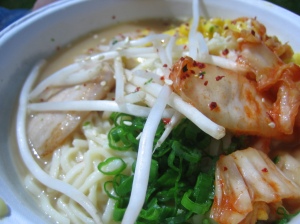 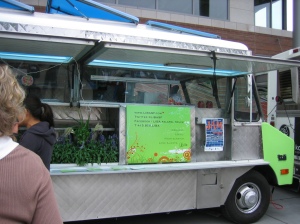 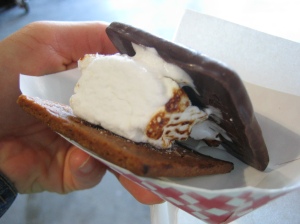 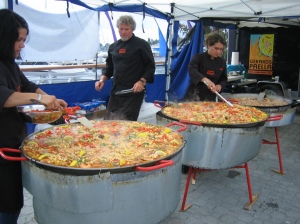 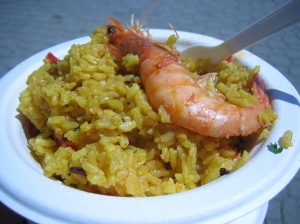 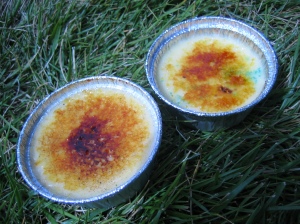 Unfortunately, I was severely disappointed with Liba’s Falafels. The accompanying roasted eggplant mixture was delightful, but the falafel balls themselves, were so overfried that their outer shells had been become dark brown and were more hard and crunchy than thin and crisp. And the accompanying flatbread was stale, doughy, and flavorless.

The three dishes that had notable elements were Seoul on Wheel’s Spicy Pork Taco (warmed tortillas that didn’t taste store-bought would’ve GREATLY helped), SLRP’s Pork Ramen (the noodles were soggy and flavorless, but the pork belly and homemade kimchee were delicious), and Gerard’s Paella (fresher shrimp and non-burnt ends would’ve made it great).

The one thing that DID live up to the cult following was the Creme Brulee Man’s vanilla bean dessert. It had the perfect crunch from the torched top and the flavor was rich and creamy like an ice cream and smooth and luxurious like a pudding. Pure heaven. 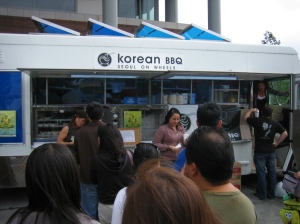 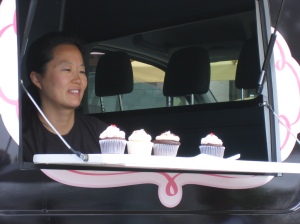 I have to admit that nothing I had blew me away. It was all good, but nothing was extremely noteworthy. Amazingly, though, I wasn’t disappointed. I was just happy to be there and share in the positive energy of the day from both purveyors and consumers.  I enjoyed the company, the weather, the variety of food, the environment overall. And I can’t wait to try more next year…

So I’ve never been happy with Pancho Villa Taqueria in San Mateo. No offense to them, but it’s always been a slightly subpar, unsatisfying experience. It’s okay, but nothing to write home about.  And there are plenty of other Mexican joints in the area, but they’re mostly sitdown places that leave you feeling…bleh. I was looking for a good authentic taqueria around here. One that wouldn’t make me feel like I’d eaten a brick afterwards and tasted fresh and homemade.

Enter Los Moreno in San Mateo. It hasn’t been around that long, but I hope and pray it will stay forever. I’ve eaten here twice in the last week, so that should tell you something.

My hubby and I have had the shrimp tacos, nachos, beef, chicken, and cheese enchiladas, and the beef tacos. Yes, a lot of food for just two visits between the two of us, but we were hungry…both times.

The enchiladas are solidly good. Tastier than most than most we’ve had in this area of the Peninsula. So were the nachos. And the beef tacos were simply made, dressed only with cilantro, and wrapped in soft corn tortillas. It was super fresh, flavorful, and the carne asade was cooked to perfection. I loved ’em. Simply loved ’em.

But it was the shrimp taco that sealed the deal. It was one of the best tacos I’ve ever had. It tasted like all the flavors of the grill were sucked up by the shrimp. They were tender and flavorful, and they didn’t skimp on the portions either. And it was dressed with grilled onions and mushrooms. Just delicious. I want one now, just thinking about it.

I hear that their burritos and numerous other homemade items on the menu are simple yet delicious as well. I can’t wait to try more. And to make things even better, their beans and rice are pretty damn tasty too.

The owners are also super friendly, which makes me feel even better patronizing them. I feel like my search for an authentic Mexican taqueria is over. 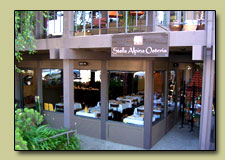 Enter Stella Alpina Osteria in Burlingame. I’d heard about this place and driven by it several times, so when my husband’s sister requested Southern Italian food, it was the perfect choice.

It is definitely a cute little place. The atmosphere is definitely well-to-do, but the decor is very low-key. We walked in without reservations and they gave us the evil eye, despite their having a considerable amount of empty tables. Fortunately, they redeemed themselves with quick seating and a smile.

The menu is diverse and we started with a beet salad, beef carpaccio, and escargots (strange for an Italian menu) to share. The salad was the weakest appetizer with it’s honey mustard vinaigrette. The sweetness seemed too much for the already sweet, yet slightly undercooked, beets. Not a good combo. But the other two were tasty.

For entrees we ordered the osso bucco special, roasted rabbit, and orecchiette with mushrooms, speck (which I now know is a type of ham) and asparagus. My husband’s fave dish of the night was the pasta with its rich parmesan cheese sauce, but my fave was the Osso Bucco with it’s deep earthy gravy that tasted like something out of your Italian grandmother’s kitchen. And the accompanying marscapone polenta was divine, not only because of its luxuriously creamy texture, but because the Osso Bucco sat on top of it so all its gravy mixed in with it.  Yum-yum! (And I don’t even like polenta!)

The rabbit was tender and juicy, but it could’ve used a tad bit more salt. The meat itself was just a slight bit bland.

The food alone has now made Stella Alpina Osteria my fave Italian joint on the Peninsula. It was definitely up to snuff and I would come back for a special night out. But it’s not without its faults…

The prices are a little steeper than its quaint and cozy persona implies (entrees run $15 (pasta) to $28 (lamb chops)). Service is a bit slow too. And like I’d mentioned earlier, the pretentiousness at the front door is a definite turn off. It probably comes from the fact that the clientele looked like they’d all returned from an afternoon at the country club.

There are obviously a ton of nail salons everywhere. So what makes this place stand out as my favorite? Here’s why:

1) Great ambiance – The zen decor and comfy chairs treatment chairs make you feel more like you’re in a spa than just a sterile nail salon. You feel like you’re paying more than you actually are.

2) Cleanliness – They clean the pedicure area after each person’s treatment and use a new set of tools for each person. And that’s the way it should be.

3) Customer Service – Though they never seem to have enough staff on hand, they are always very friendly. But make a reservation because during weekends and evenings you may not be able to get in.

4) Value – Their $35 mani & pedi special is great ($25 for pedi, alone), especially considering the quality of work they do. I’ve always been satisfied with how my nails look and how long my pedis last (sometimes as long as 2-3 weeks!). Now that’s value for your  money.

My only few complaints are how they’re sometimes short staffed and the lack of variety in nail colors (so bring your own if you want). But they’re usually meticulous with my nails and I’m usually delighted with the results.

“Spontanious, organic, covert nourishment” is their motto at Kitchenette SF, and it pretty much says it all about this slightly secretive lunch spot. But don’t let the hole in the wall appearance fool you.

In the Dogpatch neighborhood of SF, all you see are warehouses and industrial buildings mixed with shiny trendy new lofts. In one of those warehouse entrances is Kitchenette SF. No signage, only the blackboard out front advertising the specials of the day. The food is made by a collection of rotating chefs from some of the best restaurants in the city (Betelnut, Incanto, Foreign Cinema, etc.). The result is super fresh, local, organic, homemade food.

It goes something like this: they offer up a sandwich (or something of the sort), a vegetarian option, a dessert and a beverage, all of which change daily. (You have to check their website the night before to see what they’ll be serving the next day.) Today, it was the Housemade Pastrami Sandwich with roasted apple butter, braised cabbage, and grainy mustard. I also shared a bag of homemade spicy chicharrones (spanish for pork rinds, basically).

While driving there I tried not to get my hopes up. This was my first venture into the “street food” or “covert food” movement that has been sweeping the Bay Area lately, helped by chefs using Twitter as their main marketing source. This was, after all, just a sandwich.

What I was greeted with when I unwrapped my sandwich was a wonderful serving of homemade, juicy, fatty, meaty goodness. My lunch partner called the fat pieces in the pastrami, “pieces of goodness.” I agreed. The meat was nothing short of perfection and you could definitely taste the love. Moist, juicy, and with flavorful fat marbled throughout. The braised cabbage, roasted apple, and mustard created not only a great counterpart to the meat, but also texture and contrast to the flavors. They all melded nicely without any one thing overpowering the other.

Oh, and those pork rines were worth their fat content as well :).

It wasn’t a substantially large sandwich, but it was definitely enough food, though it looked small to me at first. The meal was delicious enough for us to consider another visit on another day. Hopefully, what they’ll offer will be just as good.