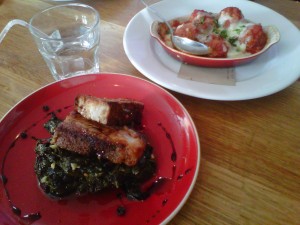 The hubby, kid and I decided to head to the city for something fun, yet family friendly.  Enter Gialina, which foodies in the area have described as one of, if not the best pizza in San Francisco.  It’s also been named one of the Best Pizzas in the country by GQ magazine.

The place is TINY and is a neighborhood joint in the Glen Park area of the city, which means you don’t head there for atmosphere or decor.  Parking is a breeze, but the wait can be torture.  The only answer is to show up before 5:30pm, which we did.  They only serve dinner, but they do it 7 nights a week.

Service is accommodating and friendly, but not warm or inviting.  They’ve got a job to do and they do it well.  However, with the space being so small and the amount of people who are waiting outside, they never make you feel rushed so they can turn the table.  I greatly appreciated that.

We had the Little Meatballs w/tomato sauce & provolone, and the Pork Belly w/sauteed chard studded with currants.  Both these appetizers are fantastic, which is why this restaurant is known not only for their pies but the small plates they put out.  Surprisingly, I LOVED the chard because the bits of currants gave it tang and sweetness that contrasted the flavor of the bitter greens and pungent garlic so well.

Then the pies.  We ordered two: the Wild Nettles pie w/panchetta, provolone and mushrooms was first.  WOW!  The combo of flavors is incredible and not one you would think of.  The nettles give texture and fresh green flavor while the panchetta and provolone give heft and richness.  But the biggest thing about their pies is the CRUST!  It’s paper-thin, so much so that you can practically see through it.  Yet it’s not annoyingly crackly and dry like a cracker.  It had a nice soft texture on top and a thin crispness on the bottom.  It was almost like a freshly baked baguette, but of course, not as thick or doughy.  How do they do that?  I mean, it’s paper thin!  And the crust also had the slightest tang, almost like it was sourdough.   Amazing and very impressive.

Our second pie was just as delicious, but in a totally different way.  The Atomica had a tomato sauce with a little kick from chilies, mushrooms, thinly shaved red onions and mozzarella.   Again, wow!  Such simplicity and quality in its ingredients and preparation.

I’ve tried A16 (the restaurant, overall, is overrated IMHO), Pizzeria Delfina (great Neapolitan-style pies, but it’s a different crust that’s much more pillowy, and the pies can occassionally be soggy in the middle), Pizzeria Picco (a bit dry and boring), and Pizza Antica (can you say inconsistent?).  But none compare to the innovation, simplicity, and sheer expertise of Gialina.  It’s the little unassuming Italian neighborhood restaurant that blows most others like it, out of the water.

2 thoughts on “Is Gialina’s the Best Pizza in San Francisco?”