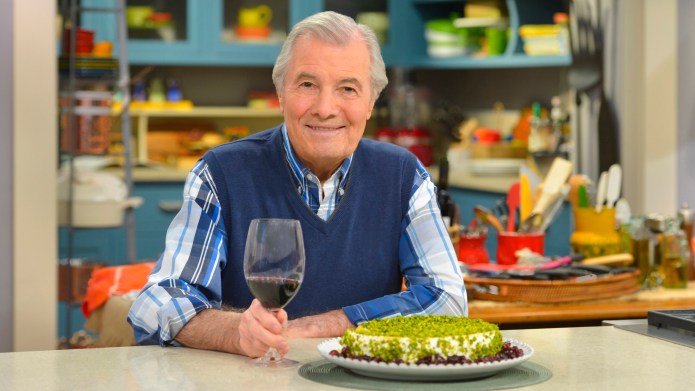 *Originally published on October 26, 2015 at SheKnows.com.

I’ll admit, my motivation for wanting to interview Chef Jacques Pépin was completely selfish. I remember as a teen watching his cooking shows with my mom and brother on the couch every weekend. As an adult, I’ve continued to watch him prepare classic French dishes on television with a level of ease and comfort that make even a complicated meal seem attainable. His style is effortless and personable, as if you were right there in the kitchen with him.

Now, with his 25th cookbook, Jacques Pépin: Heart & Soul in the Kitchen, and accompanying PBS television series, I finally got the chance to talk to this award-winning master chef. His latest project is a true labor of love that provides a narrative of his life through food, family, friends and his own artwork.

Jacques Pépin: Well, I may not stop entirely. I mentioned that I wouldn’t be doing another big cookbook like Heart and Soul and an accompanying television show with 26 episodes again. The book took about three years. Hopefully, I’ll do a smaller project, like something with my granddaughter where I give her lessons on cooking or something. But hopefully, I’ll slow down a bit.

SK: Heart and Soul seems like it’s just as much the story of your life as it is a cookbook. Was that intentional?

JP: It was an intentional decision. I did a book called The Apprentice [his autobiography], and this is a bit of an extension of this. I’ve done so many books and television series focused on food, like entertaining or making fast food. With Heart and Soul, I just wanted to reminisce. That’s why we have stories about my friends, what I cook with my daughter and granddaughter, what I cook at home or for my wife. There’s all kinds of things in this cookbook, so it’s a bit all over the place: from Puerto Rican inspired dishes (his wife Gloria is of Puerto Rican and Cuban decent) to Mexican, or Chinese or Japanese. Basically, I had no limits here with this cookbook. This is what I like to cook at home. I like all the books that I’ve done, but here there was a lot more family involved: my best friend Jean Claude Szurdak, my daughter Claudine, my granddaughter Shorey and my wife Gloria. So in that sense, it was closer to me.

SK: Heart and Soul definitely comes off that way. It seems much more special and comforting to read.

JP: Thank you! That’s the reason I put a lot of my artwork and illustrated menus in it because it shows different parts of my life.

SK: Speaking of that, there is a lot of your artwork in this cookbook. Tell me a little bit about what sort of place art has in your life.

JP: When you open the book, there are two menus. After 50 years of marriage, we have seven or eight big books of hand written and illustrated menus. We got into the habit after we got married, when people came to our house, we wrote the menu out and we’d have our guests sign the opposite page. Sometimes, I’d illustrate them, sometimes I didn’t. It’s a journey through our life. It’s very personal, so we wanted to put some of that into the book.

SK: What has it been like to have both your daughter, Claudine, and your granddaughter, Shorey, on your new show? You’ve got three generations of your family on the show!

JP: I just watched the third show in the series, and I’m cooking with Claudine. Shorey was in an episode before that for this series. It’s fun certainly. Again, it makes it more personal. They wanted to come on the show. The only one who doesn’t want to cook on TV with me is my wife, Gloria. She’s extremely private. She hates being on television.

SK: What are your plans now that you’re retiring from television?

JP: I still teach at Boston University, where I’ve been for 33 years. I’m still teaching at the French Culinary Institute. I’m the culinary director for Oceana Cruises. And I’ll still do a lot of food and wine events. I’ll still be really busy.

SK: You’ve mentioned before that some “celebrity chefs” can spend too much time on the “celebrity,” and not enough on the cooking. Who are some of your favorite well known chefs that you’re a fan of right now?

JP: Oh my gosh, there’s so many! Thomas Keller is probably the best chef in America. There’s Jean-Georges Vongerichten and Daniel Boulud. And there’s a group of us PBS chefs who are still teaching people like Lidia Bastianich, Ming Tsai and Rick Bayless. They’re great cooks and great teachers.

SK: Do you think part of being a good “celebrity chef” is about teaching and mentoring, as well?

JP: Well, it depends on your own style and character. I’m not an actor. I can’t be different than I am. Some people find my shows boring, and that’s fine with me. You can’t please everybody. Some chefs get crazy or overly fancy with their array of food, which I’m not particularly interested in. And confrontation in the kitchen isn’t my thing. I feel there’s a great deal of yourself and who you are when you’re cooking. So, the yelling is not condusive to my cooking. I know it’s television and people want that kind of entertainment. But it’s not really my style.

SK: When you’re relaxing at home with no obligations, what is your ideal meal? Would you cook or would someone else be doing the cooking?

JP: Usually I cook at home, or my wife. If she’s cooking in the kitchen and I come in, she usually tells me not to touch anything! But otherwise, what we cook is determined by the season, by the garden, by the market and by our mood. Sometimes, you’re in the mood for a soup or a stew because it’s cold. Sometimes, you want a fresh tomato out of the garden just with a bit of olive oil on top. Sometimes, you have a hangover and you want something else. But usually, it’ll be food I can recognize that is relatively simply cooked without too much embellishment on the plate.

SK: Is there anything you’d like to tell your fans who have followed your career?

JP: Well, my goal is to bring a smile to the face of someone. I hope they’re happy with what I’ve done, or follow one of my recipes and make it their own. That is gratifying for me.