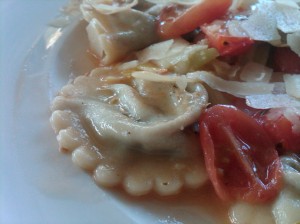 I’ve frequently complained that superior service and truly inventive cuisine just doesn’t exist on the Peninsula.  If you’re a career waiter and take it seriously, you’d end up somewhere higher profile in the city.  And the most ambitious chefs would want the glory of cooking in San Francisco.  It’s just my opinion, though I know I’m generalizing quite a bit.

Enter Donato Enoteca in Redwood City.  The location has seen a lot of turnover (right across the street from the RC Library), but it’s a seemingly perfect spot for a restaurant like this.  There’s lots of light bouncing off the clean white walls, white tablecloths, and very rustic accents and chairs.  The place is charming and actually feels like it’d be a neighborhood joint in the city if it weren’t for it’s large size.  There’s also ample space for al fresco dining here.

Though @istelleinad and I dined here only for lunch, I got a good feel for the kitchen’s potential.  It should also be noted that the restaurant is Michelin guide recommended (but not starred).

We started with the Proschutto plate.  It was heavenly with thin slices of salty tender meat, accompanied by two small baked cheese tarts mixed with egg that had the texture and taste of a quiche, and a tiny bowl of pickled spring veggies.  It was a thoughtful combination. 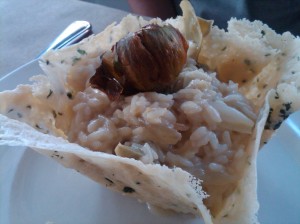 @istelleinad had the risotto special that sat in a large homemade parmesan cheese crisp “bowl”.  I had the housemade radicchio ravioli with grape tomatoes.  @istelleinad’s risotto was a bit heavy with the cheese crisp it was served with, but the risotto itself was flavorful, seasoned and prepared well.

My ravioli was also delicate and simple.  I appreciated that the ravioli tasted housemade and wasn’t overly heavy.

It was a well prepared, simple meal with delicate touches here and there.  The service was nothing special, but good.  For now, this restaurant fills a niche on the Peninsula.  It’s expertly prepared Italian food with a sophisticated (but not stuffy) vibe at a reasonable cost.  It’s not a chain, its cuisine isn’t generic, and its menu is more interesting than most.  This place has character.