Despite the herd of family and events over the holidays, I was able to carve out an afternoon to the San Francisco Ferry Building Street Food Farmers Market. This is my favorite place in the city for just wasting an afternoon enjoying the people, the view, the architecture, and the food, of course.

I was on a mission to get me some porchetta sammies from Roli Roti. I’ve been dreaming of them ever since the FoodBuzz food event late last year, and it’s been hard to get a hold of one ever since. Of course, once we got there at 1:30, they had JUST served the last sandwich. I was pissed, to say the least.

But since there were so many other vendors around, there had to be some other good eats. I picked up a Margherita pie at Pizza Politana, which served as a good appetizer. That’s when the hubby ordered some Korean tacos from the guys at Namu.

I should’ve known to come here from the start. They catered our final dinner at the big FoodBuzz event last Fall and the menu was was fresh, lively, inventive and surprising. 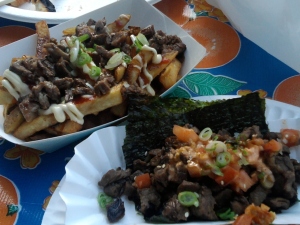 We ordered some Korean Tacos which had chopped up bits of Korean marinated shortribs (kalbi), short grain sticky rice with scallions, daikon, kimchee, and a bit of sweet soy and mayo. Oh…my…gawd. These things are the real deal! Forget all the other Korean taco posers that drive around in their trucks. These guys mean business! All the ingredients are super fresh, organic and melded together on two sheets of seaweed (nori) to create this fantastic Californian/Asian fusion “taco” that was just out of this world!

And as a side dish we also ordered the Korean Fries that were on special that day. They were tasty too, topped with the same shortribs, scallions, Asian inspired sauce on top of some wonderfully fresh fried potatoes.

Now, the porchetta sammie will always be the first reason why I make it down to the Ferry Building on Thursday or Saturday, but the guys at Namu have made it damn hard to say no to their fare if I ever get down there again.

And word has it, their actual restaurant has some killer Monday and Tuesday night specials, as well.

One thought on “Not Too Shabby for a Second Choice”