Bar Bambino has been on the San Francisco Chronicle’s list of Top 100 Restaurants for the last two years. And since it’s close to BART, it was the perfect place for a get together between foodies. So, I met Jo (Taking Over the World One Bite at a Time), Stephanie (Lick My Spoon), and Danielle (Bon Vivant) for dinner and good conversation on a weekday night.

We started with a lovely small bowl of calamari dressed with a light lemony dressing that was delightful and studded with celery for crunch. Nice mix of textures. It went well with the pomegranate sparkling wine we all had.

We shared the pork belly with braised lentils and the chicken livers bruschetta to start. I was surprised by both, but in very different ways. The pork belly was seared for a crisp exterior, but it was boring, unimaginative and even slightly dry! Almost impossible for a piece of fatty pork belly. I was disappointed that it wasn’t more inventive. And the lentils were a little too “al dente” for my taste.

However, the chicken livers bruschetta was wonderful. I have to thank Steph or ordering this because I would never have otherwise. It was flavorful, not gamey, and the bread it was on was the perfect partner for the soft and flavorful livers. It was actually the highlight of the evening.

For entrees we ordered the pappardelle with braised rabbit, tagliatelle with bolognese, bucatini with cauliflower, panchetta, raisins and pine nuts, and the roasted and pan fried chicken. 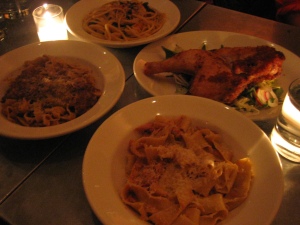 Both the pappardelle and the tagliatelle were probably the highlights of the meal for me. The pastas were housemade, buttery and delicious. The meats were braised well and had a good flavor to them. However, the rabbit was less tender than I expected and I actually would’ve liked more sauce.

The bucatini was a good effort but it was a little discombobulated. And like with all the pastas we had, I think a larger portion, just slightly, would’ve been nice. This dish had great elements, but together, it didn’t quite work.

The chicken was perfectly crispy on the outside. I LOVED the exterior. It has the perfect texture and was more like fried chicken on a more gourmet level. However, the interior was dryer than I’d like and the was lacking flavor. A common problem with ordering chicken breast, but since this is a Top 100 restaurant, I expected a whole lot more. Again, great elements but overall, a failed dish collectively.

That was basically how I felt about the restaurant and the food. Service was off, as well. They were professional enough but not friendly or personable. There was something missing or lacking with just about everything. It was almost like the restaurant was doing what it knew well, but the food and the service had no soul.  Maybe it was an off night, but I don’t believe I’ll ever be back.