There’s almost no other city in the world that is spoken about with as much love as Paris. And after experiencing it for myself for a week, I finally understand why.

There is a certain charm, sophistication and class that can’t be replicated anywhere else. Add to that their fabulous food, fashion, art and history, and you’ve got an unbeatable combination!

There are so many different sights to see and places to go in Paris. The city’s many different districts all offer a different vibe, which is remarkable in itself. Here’s a list of four that J.Low and I enjoyed most and would recommend for shopping and just getting lost in. 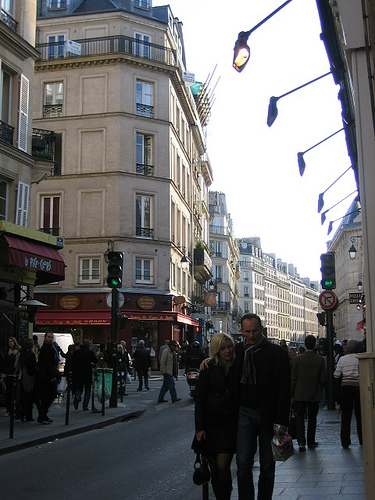 There’s a wealth of fabulous boutiques here on Rue des Francs Bourgeois (between Rue Payenne and Rue Vielle du Temple), like Mellow Yellow for the cutest shoes without totally breaking the bank. They’ve got beautiful patent leather flats in adorable shapes and funky bright colors. Then on the same street, head to La Chaise Lounge for the most fun gifts you’ll find (I got a pair of movable robot cufflinks for my husband there), Les Petits for the most stylish in wearable current fashion, and nearby Muji for sleek Japanese housewares.

Nearby on Clos des Blancs-Manteaux there’s also Les Touristes for drapes, table runners, and cosmetic bags (J. found a large cosmetic bag for only 8 euros in an adorable French provencal fabric), as well as Romane, a boutique that carries chic sophisticated women’s fashions. This was my favorite district in Paris. Great food, shopping and interesting people.

Besides Le Bon Marche (the department store real Parisians shop at) and its Le Grande Epicerie (the king of all gourmet food stores), there’s one street for bargain hunters that can’t be missed: Rue Sainte-Placide.

J had a great time finding a pair of ballet flats for 29 euros, boots for 75 euros, and a lined trench coat for 20 euros. Great prices, especially for this part of the world. Stores like Rudy’s and Mode offer good deals on cool shoes, both designer and not. And Le Generale Pharmacie sells European skin and haircare brands like Phyto, La Roche Posay, Roger & Gallet, Klorane, Weleda, Biotherm and Rene Furterer for as much as half off U.S. prices, and slightly less than other Parisian pharmacies, which made me happy. 🙂

Rue Sainte-Placide is not a long street so browse around and you’ll find some bargains.

Alleyways to get lost in, pubs to chat in, and bistros to linger in. Plus, a great array of little boutiques in those alleyways and larger chain stores near the main roads like Promod (similar to H&M) and Minelli for shoes and handbags (where I got a lovely “leather-esque” metallic silver handbag for 49 euros).

If you’ve got the cash, you can plunk it down here. This famous street right behind the Louvre has a storefront for every name brand European designer you can think of. A little rich for my blood, but if you’re into window shopping, it’s worth the trip.

As for the usual department store suspects like Galleries Lafayette and Printemps, I wouldn’t suggest it for most shoppers. It is such a madhouse in there that it’s enough to make you run for the hills. I’m an expert shopper and it made me run for cover. And there are much more interesting items to be found in the boutiques around town anyway.

It’s easy to love Paris. But by the time I left, I felt like it could love me back. And that was the best part.