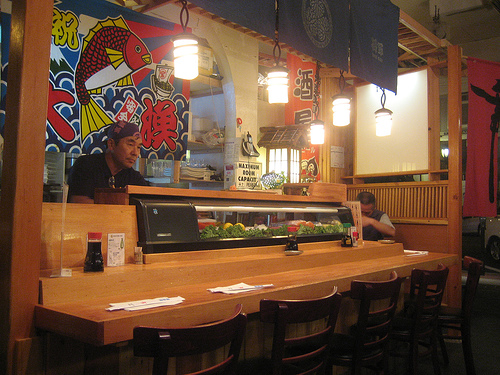 I recently read an article about “izakayas” in the S.F. Chronicle.  They’re Japanese restaurants that serve their version of bar food, which means tasty little appetizer sized dishes much in the style of tapas.  I was intrigued.  Very intrigued.

My hubby and I love Japanese food, so it was an easy decision to give it a try.  We chose Izakaya Mai in San Mateo.

We’d heard about the long wait during peak times (much like at Hotaru around the block), so we got there at 8:30.  (That’s considered late in the ‘burbs.)  They’re open until about 11:30 on most nights, so we were safe.

The menu is so extensive it’s absolutely overwhelming.  Good thing I did a little research before heading over, otherwise we wouldn’t have known what to order!

We started with the Cherry Blossom Roll, which were eight salmon and avocado rolls wrapped in fresh thick pieces of tuna (maguro), and then topped with tobiko.  Some sushi can lack any distinct flavor (poor quality) or taste overly fishy (signaling that it isn’t fresh).  But this fish was extremely fresh with bright, deep flavor.  Delicious, albeit a bit overpriced at $14.95.

The Miso Eggplant was my husband’s favorite dish of the night.  It was a large thick slice of eggplant grilled and topped with miso glaze.  A little oily, but totally worth ordering again and again.  The skin of the eggplant was left on so it provided a crisp texture contrast to the soft flavorful flesh.

We also ordered the Miso Pork Don and the Unatama Don (eel and egg).  Both were absolutely out of this world.  The pork was not breaded and had a slightly sweet, slightly salty flavor that had real depth.  We’d never had pork prepared with miso this way.

And the unagi (eel) was soft, tender, and delicious.  Along with the slightly sweet soy sauce flavoring the rice, sweet onion slivers and softly cooked egg, it was perfect fare for a chilly night.

The atmosphere here is a little wacky with all the toys (planes, trains, and pirate ships, literally) and tons of pictures with overly cute Japanese captions all over the wall.  It’s a bit frantic, and if you come during peak times, so is the service and the crowd.  But since we got there after the rush, the place was leisurely and extremely pleasant.

I can’t wait to go back and order a completely different meal.  Hopefully all will be just as tasty.