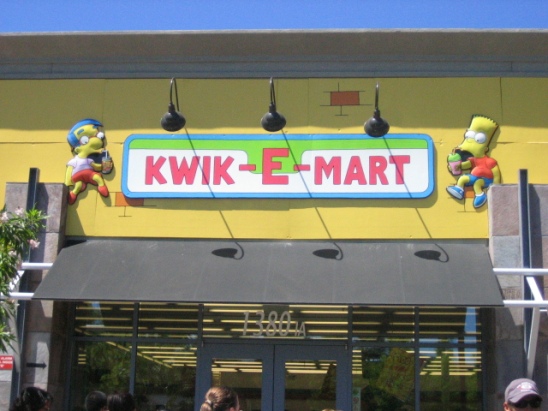 I haven’t been a regular Simpsons watcher for years, but when I realized the 7-Eleven in my area was one of the 11 chosen in the nation to be turned into a Kwik-E-Mart, I just had to go.

The Simpsons Movie is coming out in late July, and the folks at 7-Eleven decided to turn 11 of their stores in the US into “Kwik-E-Marts,” the fictional convenience store on The Simpsons.  Brilliant marketing for both the movie and 7-Eleven.

The Mountain View store is the only one in Northern California that’s been turned into the infamous Kwik-E-Mart, and that novelty hasn’t been lost on Bay Area fans.

They did a number on the exterior by turning it bright yellow and pasted over any 7-Eleven signs with “Kwik-E-Mart.”  And on the inside, large scale Simpson characters could be found everywhere, including Homer himself chomping on a hotdog.  And of course, there was no shortage of products including Squishees (the cartoon’s version of a Slurpee), Krusty O’s (just Fruit Loops in a Krusty The Clown decorated cereal box), and Buzz cola (unfortunately they were out of that).

The store was packed with people both inside and out, taking pictures and buying up all the Krusty O’s, Squishees, and other available Simpsons items they could carry.  There were way more people there than on a regular weekday at three in the afternoon. 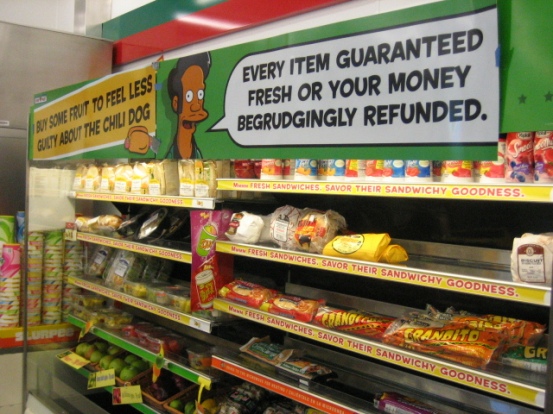 So I got my pictures, as you can see, and picked up a few Squishees and Krusty O’s for myself.  I know it’s kitchy, but it was fun.  I figured it was a once in a lifetime chance for me to live The Simpsons, even if it was only in the form of a gussied up 7-Eleven.

2 thoughts on “Thank you, come again”