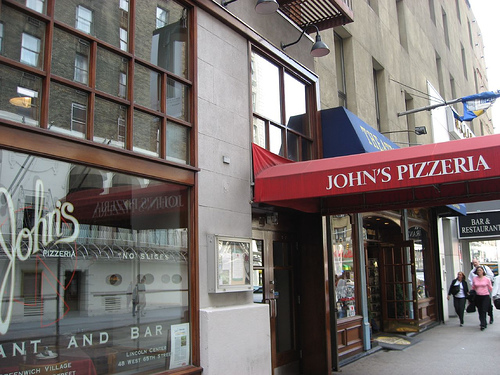 Last week I was fortunate enough to visit a city I love, the Big Apple (which of course makes me sound like a total tourist).  I love the Bay Area, but there are still some foods you just can’t find outside of NYC.

First stop the day I arrived was John’s Pizzeria (44th St. btwn. 7th/8th Ave.).   I didn’t make it down to the one on Bleeker St. in Greenwich Village, but I did go to the one near Times Square (it was closer to my hotel).  The one thing I long for more than a good deli sandwich, is a great New York style pizza.  John’s isn’t the best in the world, but in my humble opinion, it is one of the best.  I love the perfectly thin crust that’s been slightly blistered on the bottom from the coal fired oven, yet still spongy in the middle.  The housemade tomato sauce is just zesty enough with a slight sweetness from the tomatoes.  And the creamy mozzerella and fresh basil make the whole pie complete.  It’s so simple yet almost impossible to find anywhere in the Bay Area!  And the Times Square location is housed in an old church that’s about 3000 square feet big.  It is the most beautiful pizzeria you’ll ever visit, especially with it’s beautiful mural, gold staircase, and stained glass dome ceiling.  It is the largest pizzeria in the world.  Pretty setting, great pizza, fabulous experience.

Japanese food isn’t usually something I seek out while in New York City because the stuff you can get in the Bay Area is very good.   But I was trying to find some decent food around my seminar location in the middle of Times Square.  I was worried because all around you are chain restaurants and I wasn’t in the mood for Olive Garden (YUCK!).  I was lucky to find Teriyaki Boy (Broadway @ 48th St.) and Sapporo (on the opposite side of Broadway @ 48th St.).  I stopped into Teriyaki Boy not expecting very much, but their Katsu Curry Rice dish was superb.  The sauce was in the classic Japanese style; thick and just slightly sweet.  The chicken was moist, tender, and perfectly cooked.  I actually craved it again for dinner that night!  A good reliable lunch choice if you’re ever out in Times Square.

And next up was Sapporo on my second day of my seminar.  There were tons of people there when I visited for lunch, but the wait went very, very quickly.  People were slurping their noodles and quickly enjoying their rice plates before rushing back to work.  I had a bowl of the Miso Ramen, which are Japanese noodles in a meaty broth with pork.  This was probably one of the best bowls of ramen I’ve ever had (the only one better would be at Santa in San Mateo).  The noodles were the perfect texture, not soggy but not too firm, and the broth was full of flavor from the tender pork.  I loved it and would totally go back the next time I’m in town.

Junior’s is a total touristy restaurant, I know (45th btwn. 7th/8th Ave), but I think it’s deli sandwiches are highly underrated.  I always get a pastrami or corned beef reuben and have never been disappointed.  And I love their vinegary cole slaw and beets.

I wish I could say the same about Carnegie Deli on Broadway.  With the reputation this place has, the corned beef on rye I ordered was shamefully bad.  The corned beef was dry and flavorless and even the pickles tasted strange, like they were stored incorrectly.  YUCK!  Avoid this place like the plague, especially since Stage Deli is just down the street and better.

Those are just some of the yummy things (and not so yummy things) I got a chance to experience.  Didn’t get the opportunity to have the perfect bagel or falafel this go around.  But there’s never enough time to enjoy all the culinary classics New York has to offer, is there?